Iron and Pregnancy: Why You Need It, How Much, and How to Get It

Iron and Pregnancy: Why You Need It, How Much, and How to Get It

There are few times you hear more about the importance of iron than during pregnancy. But have you ever wondered why this mineral is so crucial and how you can be sure you’re getting enough? Us, too. That’s why we spoke with experts to find out more about iron’s role when you’ve got a bun in the oven.

Why You Need Iron

First, some basics: Your body uses iron to make hemoglobin, a substance in red blood cells that transports oxygen throughout your body. During pregnancy, your body supplies blood and oxygen to your baby, so the demand for iron goes up to keep up with the increase in blood supply. In fact, you need about twice the amount of iron—27 mg per day—than you do when you’re not pregnant.

However, about 15 to 25 percent of U.S. women develop iron deficiency, also called anemia, during pregnancy, according to the American Pregnancy Association. Severe iron deficiency anemia is scary—at worst, it can cause premature birth, low birth-weight, and infant and maternal mortality. But if you become iron deficient, chances are very good you’ll be able to catch it and treat it long before those risks become actual threats. 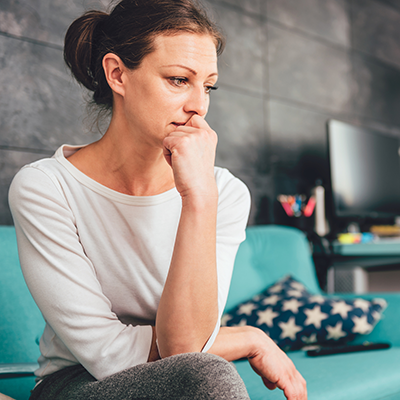 This Mom’s Pregnancy Story Will Inspire

Every woman’s journey to conception is uniquely hers. For this first-time mom, learning how to manage stress was the key to success.

“For the most part, iron deficiency makes you feel lousy,” Dr. Goist says. “It can lead to fatigue, light-headedness, and dizziness. When you throw those on top of typical pregnancy symptoms it’s a double whammy.” So be sure to mention any unusual symptoms, including exhaustion that seriously disrupts your day, to your doctor.

Are You Getting the Right Amount?

Most doctors check your iron levels when they draw labs during the first trimester and again later in pregnancy, Dr. Goist says. That’s how mom-of-two Jenny DiBenedetto, 38, in Mount Pleasant, South Carolina, discovered she was anemic during her first pregnancy. “I had no idea,” she says. “It was revealed via a routine blood test at an early OB appointment. I was exhausted, but I was in my first trimester so that was to be expected. I was growing a tiny human, after all!”

Her doctor recommended an iron supplement. “That, along with eating tons of red meat and leafy greens, helped raise my levels enough that it wasn’t at all worrisome for my baby’s health,” DiBenedetto says.

That approach is the ideal way to combat low iron levels, says Rebecca Blake, R.D., senior director of Clinical Nutrition at Mount Sinai Beth Israel Hospital in New York City. “Since we know you can get the iron you need through a supplement, it’s a great way to help pregnant women bring up their iron levels without worrying whether their dietary intake is adequate,” she says.

There’s little risk of getting too much iron during pregnancy, especially if your levels were already low, so just follow your doctor’s advice regarding supplements. You may have heard upping your iron can cause constipation, and that’s true, even if you are just raising your consumption to pregnancy-appropriate levels. Iron is binding so it can cause you to become backed up—and because constipation is already a common symptom during pregnancy, the combination isn’t exactly a picnic. “However, many iron supplements used during pregnancy contain a stool softener like Colace to prevent any problems,” Dr. Goist says.

Adding Iron to Your Diet

In addition to taking a supplement, upping how much iron you’re getting in your diet will also make a difference. Not all iron-containing foods are created equal, however. There are two types of iron: heme and non-heme. Non-heme iron is mostly found in beans, vegetables, dried fruits, eggs, whole grains, and iron-fortified products; heme iron comes from animal sources, such as red meat, fish, and poultry. “Your body absorbs heme iron best, so it’s a good idea to especially focus on those foods to help keep your levels up during pregnancy,” Blake says. She recommends downing two servings of red meat per week during pregnancy.

Mom-of-one Marisa Weigand, 31, in Port Washington, New York, kept this in mind when her iron levels were low during her pregnancy. “I’m generally not a big meat eater, but I tried to have a burger about once a week when I was pregnant to help increase my iron,” she says.

Interestingly, what you consume with your iron can affect how well your body absorbs the mineral. Whether taking an iron supplement or eating iron-rich foods, downing them with calcium-containing items such as milk or cheese can actually reduce your body’s ability to absorb it. So you may want to rethink popping your supplement with your bowl of cereal. On the other hand, taking iron with some type of acid like a glass of orange juice or a tomato on your burger can boost its absorption, Blake says. Eating vitamin C (ascorbic acid) at the same time as non-heme iron significantly increases its absorption, according to NIH’s Office of Dietary Supplements.

Even if you develop an iron deficiency during pregnancy, the good news is that your stats will likely return to normal after you give birth. “By six weeks after delivery most women’s iron levels will be back to normal,” Dr. Goist says. But if your levels were low, continuing to beef up your dietary iron intake will help rebuild your body’s iron stores so you’ll have all the energy you need to keep up with your new bundle of joy.